Large campsite, 200 feet south of trail, toward Palisade to Campsite at Mile 840.60

We started the day about 15 miles away from the top of Muir Pass.

In case anyone is wondering, that isn't an ideal distance. In theory one should start the day close to the pass, so you can get the uphill done in the morning when any snow present is harder and the streams are lower in volume.

So, Mighty Mouse and Share Bear and I started walking around 7:30am. At our first break we were joined by Mountain House who joined us for the rest of the day's hiking.

Mountain House got his name because that's the meals he has, Mountain House freeze dried meals. He ordered a whole year's worth from some online company. They came as a full palate to his house.

A late lunch break found us about 5 miles from the top of the pass. The pass had a pretty steep climb, about 1100 feet in a mile, but that section went okay, and we were able to recover after the steep climb in a meadow populated by cute marmots.

However, Muir Pass is not about short steep sections or fluffy marmots. Muir seems to be about multiple water crossings and snow crossings and trail that disappears under snow and streams and sometimes lakes.

At some point we no longer bothered looking for rocks to hop across the streams, because our feet were already soaked from the previous crossing or a long stretch of slushy snow.

Eventually we got to the base if the last stretch of snow before the top of the pass. The tracks led straight up a fairly steep snow slope. So on with the Micro-Spikes traction devices and away we tromped, up the slope, stopping to catch our breath a few times before the stone hut, built in 1931, came into view.

We spent a couple minutes at the top of the pass, taking pictures and checking out the cool stone hut before putting our packs back on and heading down the pass in search of a campsite.

The far side of the pass featured streams that basically spanned the entire hillside and swallowed the trail, to go along with with snow fields and Boulder fields to traverse because the trail was buried someplace under the snow.

Eventually, after the sun had dropped behind the mountains, one of the other thru hikers that we had been leapfrogging for a few days came back on the trail and directed us to some camp sites they had found and we set up for the night next to a small river that drains a high lake. 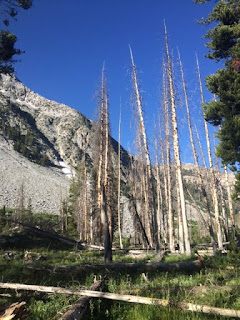 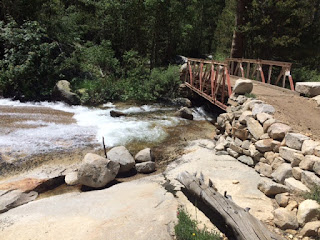 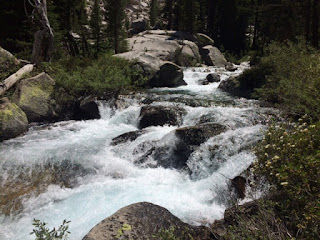 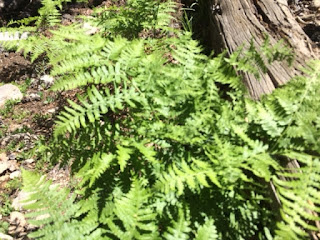 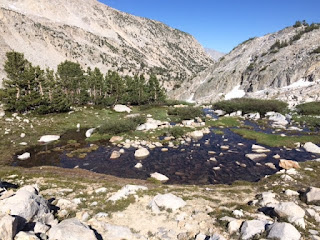 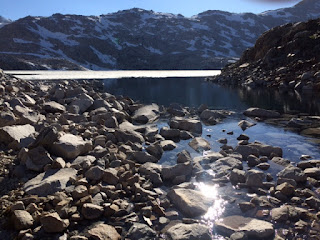 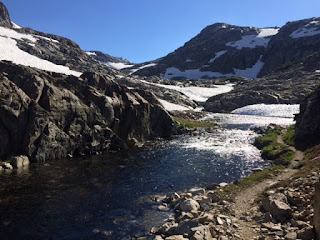 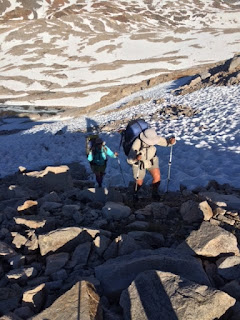 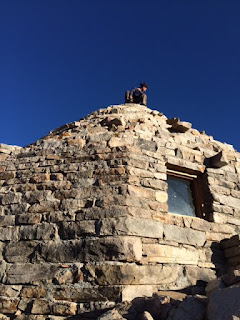 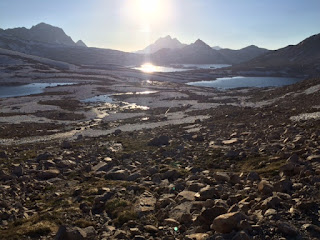