Campsite at Mile 782.53 to Kearsarge Pass to Lone Pine

Woke up at our camp site about three miles down from yesterday's high point of Forester Pass.

Today's objective was to go about six and a half miles down the PCT and then turn off and hike about seven and a half miles out, over Kearsarge Pass to meet Mighty Mouse's husband, Tim, at the Onion Valley trailhead for a ride to Lone Pine and a couple nights in a hotel there to rest up, clean up, and resupply for the next 90 mile stretch.

After two pretty tough days I was thinking this day would be easier. It was not. Along this stretch the PCT shares trail with the John Muir Trail. The JMT trail builders were a tougher breed than the PCT builders, and seem to be happy to make their trail much steeper.

Kearsarge is a tough resupply, but the alternative would be carrying a whole lot of food, so the 15 mile round trip is necessary for many hikers.

Still, despite the tough miles today, the Sierras continue to amaze with fantastic, jaw dropping scenery. 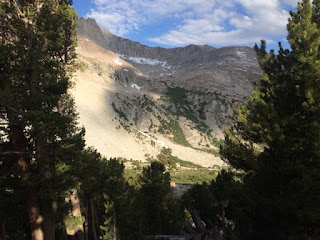 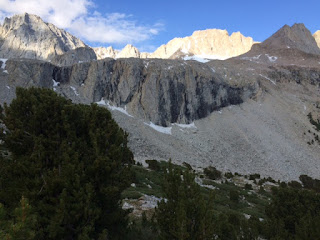 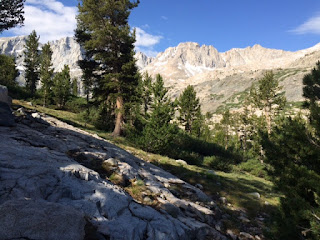 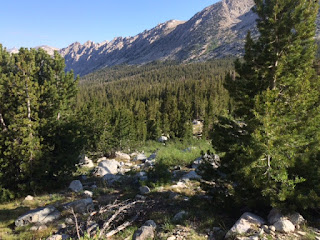 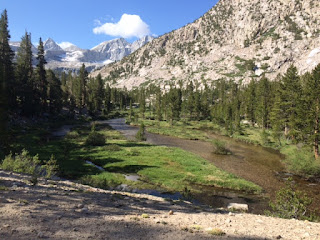 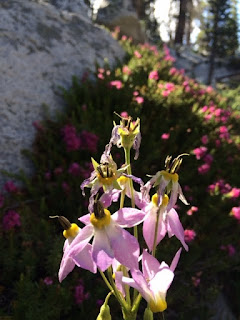 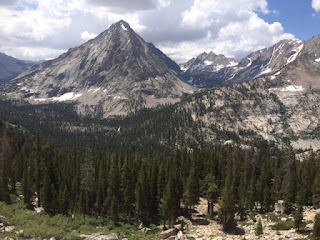 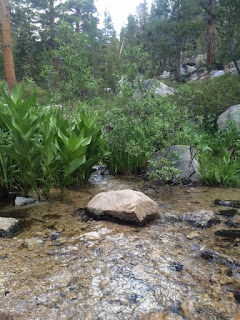 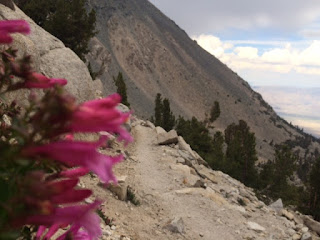 After yesterday's summit climb of Mount Whitney, we packed up this morning and headed for Forester Pass. But first we had some creek crossings that required wading through refreshing snow melt water.

Fortunately today's temperature was reasonable, and we even had some clouds roll in while we were making our way to the day's focal point, crossing Forester Pass.

As we ate lunch at the last creek crossing, about five miles from the pass, we got a few drops of rain.

Continuing on toward the pass, the clouds began to get thicker and darker. Still, it was nice to have the cloud cover after many days of bright sun.

We crossed a couple snow fields and maybe part of a frozen lake as we approached the switch backs that lead to the pass.

About a quarter mile from the top of the pass we heard thunder and saw lightning in the clouds above the surrounding mountains.

Mighty Mouse, Share Bear and I took shelter under a rock overhang and watched the clouds. We got a little rain and some sleet and freezing rain. We were also treated to a lightning and thunder show.

Eventually the thunder stopped and we were able to get to the top of the pass safely.

At some point my phone got cold and decided it didn't want to work, so most of my photographs were taken with my real camera, so I will post those at some future date.

The views in all directions were spectacular. We made our way across several snow fields in the way down. There were tracks were other hikers glissaded, or slide down, the snow fields, but we decided that there were a few too many rocks sticking out of the tracks, so we walked.

Every step down the valley revealed more and more beauty. Words and photographs cannot adequately describe the beauty here.

Tonight I am camped on a hillside, listening to the roar of a snow fed steam as it tumbled down the valley below. 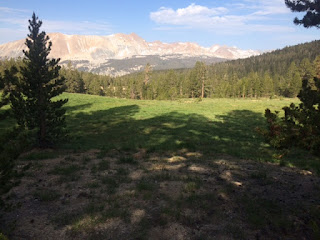 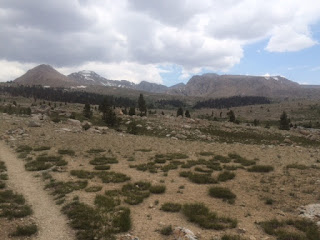 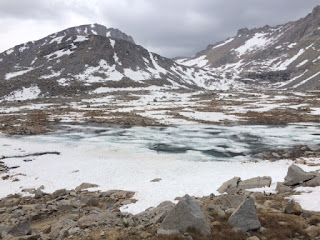 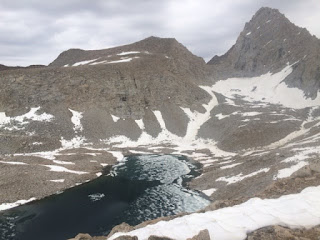 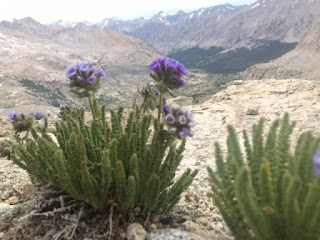 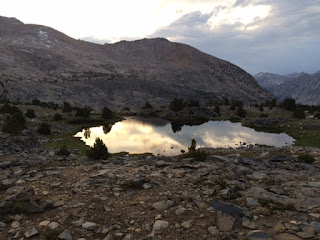 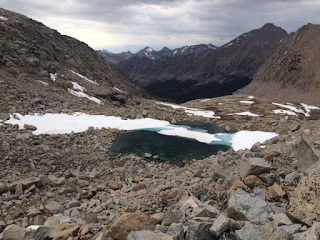