So, there is a pretty big gap in my hike now. I had some health issues and decided to take the bus from Tuolome Meadows back to Mammoth to see a doctor. I ended up on antibiotics and consequently took about two weeks off of the trail. I had a choice of starting where I left the trail which would have meant I would be a couple weeks behind my hiking partners, Mighty Mouse and Share Bear, and also a couple weeks later into the season meaning cutting things close in Washington where we have to worry about snow in early October. The other choice was to skip ahead to where ever Mighty Mouse and Share Bear were once I was healed up and ready to get back on the trail, which is what I have done. So I have about a two hundred mile gap that I will try to fill in at a later date, maybe this year, maybe some other year.

At any rate, I am back to hiking. And it kicked my ass today. Or rather my feet. But we managed twelve miles and we didn't start hiking until after noon, so that wasn't too bad.

Tim dropped us off, and hiked with us for a couple miles up the eight mile climb that started the trail.

Along the way today we passed the 1200 mile mark of the trail.

The climb was pretty steady, switch backing through trees and then emerging to traverse some steep slopes that gave us views of Sierra City far below.

There is a haze of smoke hanging around, I understand it to be coming from a fire in Monterrey, which seems like it is a very long way away.

Camped tonight with Mighty Mouse and Share Bear and Painter who is from Tasmania. 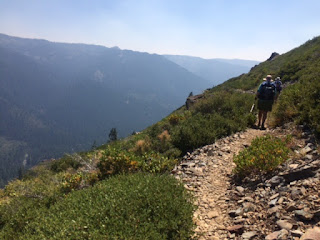 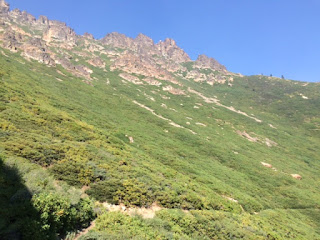 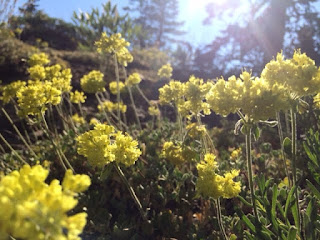