Canada and the end of the trail.

Slept in today, figuring that there weren't too many miles to go before the border and also putting off packing up in the steady rain that had been falling all night.

It turned out that I set up partially in a dip that turned into a puddle with the falling rain, so the foot end of my tent was sort of a water bed. Happily, my inner tent kept the water out so I stayed mostly dry, the only water that got to my sleeping bag was condensation on the inside of the tent that got knocked off by the splattering of rain drops on the outside of the tent. It's a phenomenon that seems to happen with tents made of silicone impregnated nylon. I guess water doesn't cling to it very well. Other waterproof nylons don't seem to have the same issue of water getting sprayed off the inside of the tent.

Sherlock and Sunshine were still packing up when Mighty Mouse and I headed out.

We passed a few of the other PCT hikers who were on the same alternate as we were as they were breaking camp. They passed us a few miles later.

The trail was in good shape with only a few blown down trees. Plenty of water in some spots, but it was our last day.
The trail came back out to Ross Lake and emerged at a cabin where several hikers were hanging out on the porch.

Mighty Mouse, Aviator, Kodachrome and I walked down the road together and found Tim waiting at the border. Not mush to the border, a survey marker and signs for the respective parks on each side. There was a monument obelisk up a steep slope in the clear cut strip that runs along the border. Across the lake the clear cut was visible going up and over the mountains.

A bit later Domestix, Blue Bird, Speedy and Saint Nick made it to the border.

Tim drive those four about ten miles down the road to a spot with more parking lots and more traffic so they would have a better chance of getting a hitch out the 30 more miles to town.

Sherlock made it next and then finally Sunshine made it to the border. After a few photos, Tim returned and six hikers piled into the SUV, our packs on the roof. We drove to Hope, BC and directly to a pizza place.

The hike was over, finished.

I will probably write a reflection piece some time, but right now I am nearly home.

I stayed with relatives in Vancouver for a few days, sight seeing and visiting.

On Tuesday I caught an Amtrak bus to Seattle and then boarded the train to Los Angles. If you haven't travelled by train and have the time, I'd recommend it. But get a sleeper car room if you can. The seats are fine and sleep is possible, especially in business class, but a flat bed would be better.

Looking forward to whatever life brings next. 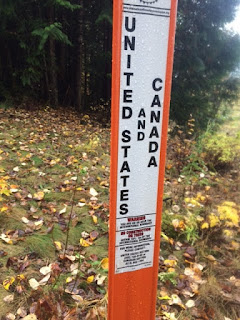 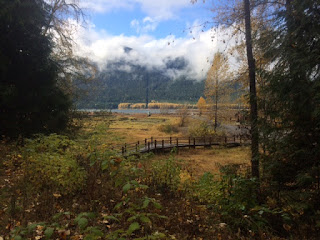 Tim and Kodachrome and Aviator