Writing this a week later, as I am back on the trail.

On Tuesday, May 3, my hiking partner, Mighty Mouse was bitten by a rattle snake.

Fortunately we didn't do too many things wrong, and after calling 911, two San Bernardino County sheriff's helicopters were in our area, and Mighty Mouse got an express ride to Loma Linda Medical Center where she landed in the ER and got a bunch of doses of anti-venom.

Coincidentally, Mighty Mouse's nurse in the ER was my cousin Jeremy.

Mighty Mouse and her husband Tim are now staying at my parents' house while she recuperates, her ankle is still swollen and she can't yet put weight on it, but she is eager to get back on the trail.

The snake that bit her was hidden in some dry grass at the side of the trail. Apparently this snake hadn't read the part of the snake manual where it tells them to rattle first. It struck, then crossed the trail and then rattled as it headed off into the underbrush.

Fortunately it was a regular rattle snake. The day before we had encountered a Mojave Green, which I understand to have a much more potent venom. That guy was just sunning himself on the trail and only deigned to move when I bounced a pebble onto him.

After Mighty Mouse had been airlifted out, I caught a ride with a second helicopter, along with both of our packs, and met up with a sheriff who drove me to meet Mighty Mouse's husband. We then drove down to the hospital.

Anyway, I am back on the trail and Mighty Mouse is recovering and in good spirits. 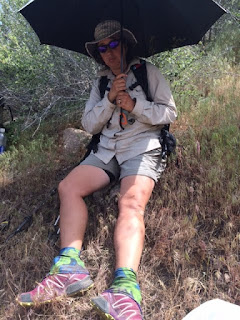 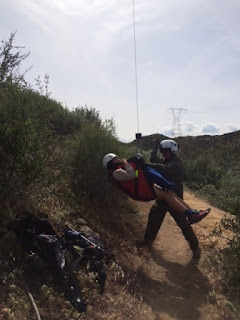 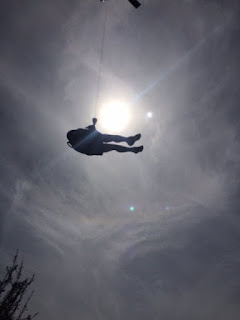 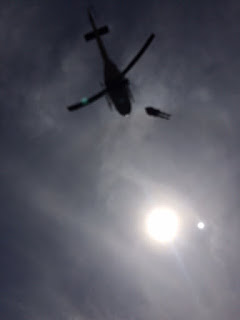 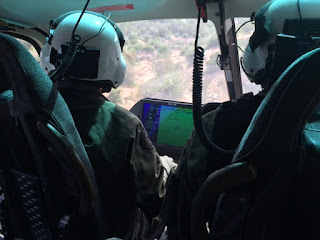 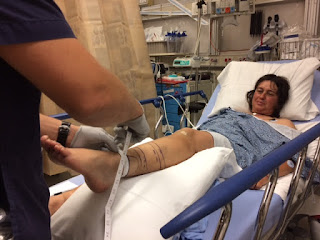 After a breakfast of leftover pizza at out campsite at the Mojave River Campground, Tim drove up back to the trail where it passes under highway 138 on the west side of Silverwood Lake.

We were planning on a relatively short day, just to Cajon pass at I-15. Plus, since we were going to meet Tim again at the 15, we were slack packing with just water and a little bit of food.

The trail today was through chaparral, so there wasn't much on the way of shade, but we managed to find a bit when we stopped for lunch.

Mighty Mouse turned around and was thinking that a thorn or something had hit her ankle. I told her that I thought it was the snake. We walked a few feet and she sat down and we looked, and there was a tiny red spot where just a single fang from the snake had hit.

We talked for a little bit about what to do, and Mighty Mouse wanted to keep going. We were maybe 4 or 5 miles from the end of our day. After a short bit, Mighty Mouse said that her lips were feeling tingly. I stopped her and got her to sit down on the side of the trail (after beating the bushes and grass to make sure there weren't any more surprises).

Fortunately when I checked my phone, there was a strong signal. Looking back, I should have just called 911 straight off, but we were both wondering what we should do, so I looked up what to do. Then called Poison Control, who told me to call 911. So, 911 it was. Mighty Mouse was fretting about wasting a helicopter ride and such.

911 was good, and I was able to give them GPS coordinates from my satellite tracker.

It only took about 15 minutes for a helicopter to arrive. Actually two helicopters came. One set down in some bushes below the trail, which of course, was on the side of a slope as usual. One of the helicopter crew walked over from the helicopter that had landed and checked on Mighty Mouse.

Mighty Mouse asked if he had antivenom. He told her that it didn't work that way, and that she'd need to go to the hospital. The closest hospital that is a snake bite treatment center is Loma Linda University Medical Center, so that's where they were taking her.

The helicopter above dropped a bag with a sling harness in it and a helmet. Mighty Mouse put the helmet on and the crew member helped her into the sling.

The other helicopter hovered overhead and lowered a cable, which the crew member on the ground hooked up to the sling. Mighty Mouse headed off into the sky. I watched her be winched up to the helicopter and be pulled inside.

The crew member grabbed Mighty Mouse's pack (thankfully light due to our slack pack day) and together we hiked through the tall grass and bushed back to his helicopter.

I jumped in the back of the helicopter with the packs, and we flew a couple hundred yards to a dirt parking lot where a couple sheriff's cars were parked. I talked to the San Bernardino Sheriffs there for a couple minutes, giving Mighty Mouse's info as far as I knew it, and letting them know where Tim was supposed to meet us. I called Tim and thankfully got through to him. He was already at the hotel at we had planned on staying at. We moved the packs into one of the Sheriff's cars, then that sheriff gave me a ride to the hotel.

Tim and I packed up quickly, and since Tim had already paid for the hotel room, he asked them to give it to Wildcard if she showed up there, since we knew she was a few miles behind us. I don't know if she got the room, hopefully so.

I called my parents and let them know what had happened and that we were going to drive to Loma Linda.

By the time we got to Loma Linda, Mighty Mouse had been admitted and given a few units of anti-venom. She had marker lines on her legs, and the nurses were measuring at intervals to determine how much swelling was happening. My mom met us at the hospital and ended up taking me home.

Amusingly, when Mighty Mouse got to the hospital, she was telling a nurse in the ER what had happened, and said that she had been on the PCT with her hiking partner "Brad" and he asked her what that Brad's last name was. That nurse is my cousin, Jeremy.

Mighty Mouse spent three nights in the hospital and they used 26 units of anti-venom.

In the mean time, my mom gave me a ride back to my house in Riverside.

Tim stayed at my parents' house, and when Mighty Mouse was able to leave the hospital, she stayed with them too.

At this point we didn't know how long it would take for her to get back to hiking.

After a week, I decided that I needed to get back on the trail, just to keep moving. I planned on going slow so Mighty Mouse would be able to catch up when she restarted, since we were both quite sure that she would get back to hiking as soon as she was able.

But, at the end of this particular day, that point was still in the future, and although anxious about Mighty Mouse's condition, I was happy to get a break. Showers and soft bed.