Descended from Guffy campground to Inspiration Point where the trail crosses Highway 2, just one of many road crossings of Highway 2 for the trail. This particular crossing is where most hikers hitch into Wrightwood for resupply.

My mom and Tim, Mighty Mouse's husband met me at the roadside rest area with lunch and my food resupply package that will get me to Agua Dulce or Acton.

After lunch I kept on hiking until stopping a little less than a mile up the slope of Mount Baden Powell, the next big climb.

Along the way I noticed that what I had thought was Mount Baldy was, in fact, some other peak between the trail and Baldy itself. Baldy turns out to actually be bald, go figure.

The trail today passed by the lifts and ponds at the top of Mountain High Ski Area.

Camp tonight was on a smallish shelf at the end of a switchback. Someone had built a nice wooden bench, and there was enough flat area between the bench and the drop off that we fit four sleeping bags. No tents tonight. 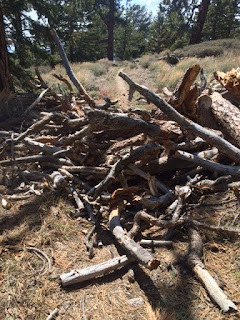 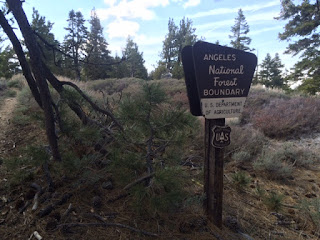 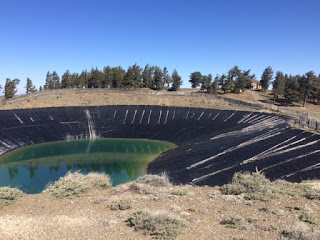 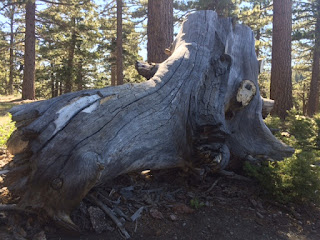 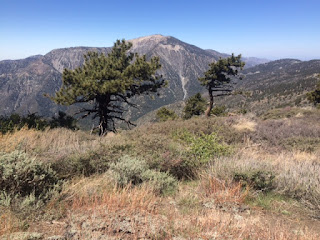 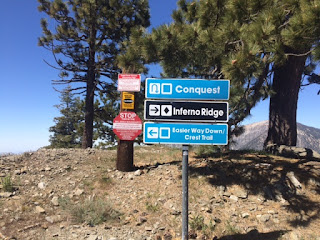 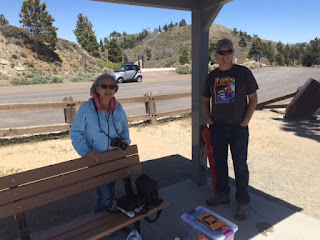 From Guffy Campground, the trail descended to cross California Highway 2 at Inspiration Point. this is a lookout and rest area on the road where many hikers hitch rides into the town of Wrightwood in order to resupply there.

Instead of hitch hiking, I was met at the rest area by my mom and Tim, who brought my resupply to the rest area. They also brought some burgers, so I had lunch while I repacked, adding food and giving them my garbage.

A quick note about garbage. Most hikers try for a Leave No Trace (LNT) philosophy on the trail. We don't always do it 100%, but that's the goal. Towards that end, any packaging from food gets carried until there's someplace to dispose of it properly. Some people like to burn their trash, and for paper products that might be okay, but there aren't really a whole lot of places along the trail where open fires are safe, or legal. Even alcohol burning stoves, favorites among ultra light hikers, because they're, well, light, are banned in at least all of the California wilderness areas, primarily because they have no "off" setting, you have to burn all the fuel that you put in them unless you have some way to smother the flames. Plus, most alcohol stoves are home built, with a great variability in construction quality and function. Anyway enough on stoves, which isn't the topic here, although one piece of trash for the type of stove I use is the metal fuel canister, which has to be carried out when empty and otherwise useless.

And yes, part of the LNT application on the trail is that you're supposed to tote out your used toilet paper. You'd be amazed at how little you can use when you know you'll have to be carrying it out with you...

After Lunch I continued with the walking. The trail in this area intersects with Highway 2 several times, many of the crossings corresponding with a rest area. Thanks to budget cuts and probably a bunch of other factors, many of these rest areas along the road don't seem to see regular attention from either bathroom cleaners or garbage collectors. And they get lots of people coming up from Los Angeles, so at a few there were overflowing trash containers and the interior of the outhouses were truly foul.

Another note here, this time on the outhouses that typically populate these rest areas and many of the national forest campgrounds. They seem to be cast concrete structures that have been trucked in. I'm not sure if the pits under them are also concrete and can be cleaned out, or if the concrete buildings have to be moved eventually over new pits, but the buildings themselves seem almost bomb proof, apart from the doors, which I've seen ripped off, and the toilets, which I've also seen damaged. Good quality structures, and if the ventilation is working properly, they aren't even particularly stinky.

The trail passed along the top of the Mountain High ski area, the lifts, signs and water pond for winter snow seemingly out of place alongside the trail.

I ran across Pete (Sketch) at some picnic tables at the road crossing / trail head just before the climb up Mount Baden Powell. There was a guy there sharing beers, so of course, we hung out for a while.

A couple other hikers that I had met in the past couple days happened along, and in a loose group we started up the trail, keeping a look out for a decent camp spot. There were a couple on the maps, but they looked like they were going to be further up the trail than we wanted to go, give that it was getting late in the day.

Eventually we came to a switchback turn for the trail that was a bit larger than most, and that had a bench. We ended up cowboy camping here, maybe a third of the way up the climb of Mount Baden Powell. A little mouse was determined to get to some snacks that I had in a belt pouch of my pack, and didn't give up until I moved the snacks and left the pouch open for the mouse to explore and find it empty.

Four of us, just barely room for our sleeping bags, definitely no tents.