A fairly easy ten miles from Acton to Agua Dolce.
Highlights of the hike were a group of crows playing in an updraft just above the trail, the tunnel deep under highway 14, Vasquez Rocks, and my girlfriend picking me up for a weekend at home.

Video: Ravens playing in the wind 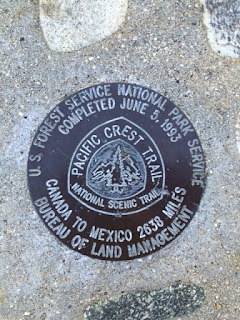 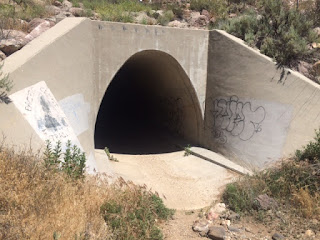 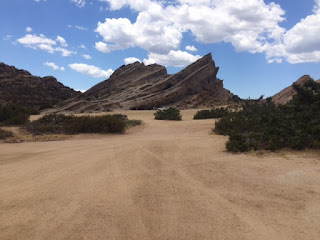 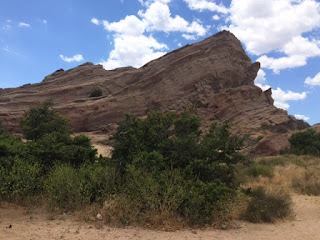 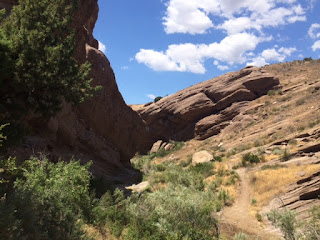 --------------
2021 Update:
Got up in the morning at the KOA. The night could have been more restful. For whatever reason, the campground has bright lights on all night.
Also, like every KOA that I've ever seen it was near at least two of the following: A busy road, an active rail line, an airport. In this case, there wasn't an airport nearby, but there were plenty of cars and a long freight train or two.
Leaving the KOA the trail immediately crosses the rails, then heads up into the dry hills.
It was another windy, shadeless hike today.
One fun thing was watching several ravens having fun in the wind that was funneled up a slope. The ravens put on a fun aerial acrobatic show for at least the ten minutes I stood watching them.
Just before getting to Vasquez Rocks, the trail crosses under Highway 14. In fact, the trail goes through a tunnel way under the highway. And oh, was is deliciously cool in that tunnel. But I couldn't linger, I was heading for Agua Dulce to meet my girlfriend and head home for a few days.
After leaving the tunnel, the trail enters the Vasquez Rocks Natural Area Park. This is maybe most famous for being the site of an epic fight between Captain James T. Kirk and an alien. Or something like that. Yep, an episode of the original Star Trek TV series was filmed here, among the cool rock formations.
As I walked through, I did spot a few people taking pictures, including one guy that had a model out on the rocks in the mid day sun.
A short road walk later I arrived at the grocery store in Agua Dulce where I would meet my girlfriend.
One thing that I missed by not staying in Agua Dulce was the experience of staying at one of the well known trail angels home, Hiker Heaven. It's future is a bit in doubt, the owners ran if for a couple decades, but since the numbers of hikers keep going up, it is harder and harder to run such an enterprise on the informal basis that most trail angels run under. Everything changes.
At any rate, I had some time, and relaxed in the shade out front of the grocery store, chatting with many other hikers, everyone venturing into the grocery store for snacks and drinks.
It looks like my "Go Slow" approach included taking nearly a week off here to let Mighty Mouse do some catching up. Hiking to resume on May 24.
Photos from today: https://www.b-photo.com/Travel/PCT-2016-Day-by-Day/May/May-18/