Up from Cajon Pass to forgotten camp site

After a week off, I made the decision to get back on the trail, taking it easy and expecting Mighty Mouse to catch up provided she could get back on the trail. We figured that I might get to Kennedy Meadows a bit before she would and I could wait there or go home for a little while at that point.

Got back on the trail after a week at home. Climbing isn't a gentle way to get back into the swing of hiking...

Gained about 3900 feet of elevation and lost about 1300, so I ended up bout 2600 feet higher than I started at.
The numbers don't look all that impressive, but the hiking was, especially on feet and legs that have gotten used to the pampered existence at home.

Had good views of some impressive rock formations, and also the nasty smog layer splicing into the mountains from the valley below. Hard to believe that I normally live under that muck.

12 miles today, 12 or 13 tomorrow before the first water. That meant that I started off with a lot of water. Water is pretty damn heavy, and I wasn't enjoying the weight. At least the pack gets lighter as I drink.

Headed even higher tomorrow, might be back to chilly nights for a while here in the mountains.

I can't remember where I pitched my tent this night. I have in my memory that it was just off the trail among some bushes with a couple other hikers in the vicinity. 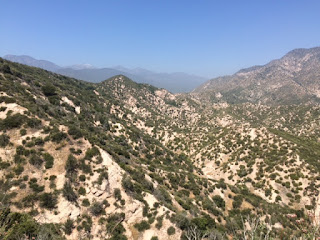 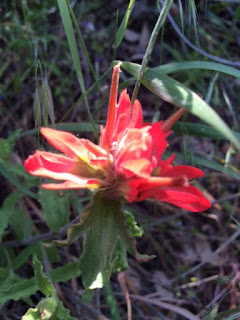 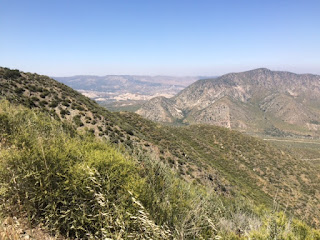 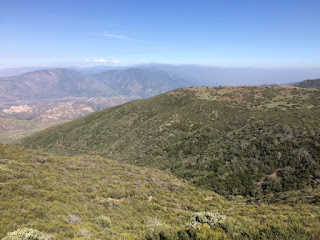 After a week at home, hoping for a quick recovery for Mighty Mouse, it became clear that although she was determined to get back on the trail as quickly as possible, that it was going to take at least another week, and probably more than that.

So, I made the decision to get back on the trail so I didn't lose whatever trail fitness I had. I planned to go a little slow so when Mighty Mouse got going again, she'd hopefully managed to make up some time and distance. The next real gateway is Kennedy Meadows (South) which marks the beginning of the Sierra Mountains. We decided that if I got there ahead of Mighty Mouse, I'd either wait there or come back home and wait there for our trips to sync back up.

So, I packed my gear back up and my girlfriend delivered me back to the trail at the point where it crosses under the I-15 at Cajon Pass.

The trail passes under the interstate through a long tunnel. Nice and cool inside the tunnel, but I had miles to go, and quite a bit of climbing over those miles.

The next 25 miles or so are supposed to be waterless, and it was hot, so I was additionally burdened by carrying something like twelve liters of water and Gatorade. Of course, since I was carrying all that water, I found a water cache just about four miles in to the hike. There were a couple other hikers there, and I stopped for a bit to socialize, but didn't take any of the water from the cache.

Had good views as I headed up into the mountains. Quite a few interesting rock formations, but also the unattractive view of the brown layer of smog that hangs over Los Angeles. You don't really notice it if you're in or under it, but viewed from above, it's plainly visible.

There weren't a whole lot of trees for shade on this stretch of trail, so any decent bits of shade tend to become resting spots for hikers taking breaks. I met a few other PCTers at some of these stops.

Eventually I covered the distance that I had planned for the day and found a spot just off the trail in a bunch of bushes. A couple other hikers set up nearby as I made dinner. This is a dry camp, I think I should get to a water source tomorrow, but thanks to starting heavy with lots of water, I'm still okay for hydration even though it was a hot day full of climbing and sun.