Campsite on Fuller Ridge to Ziggy and the Bear (Whitewater)

Camped overnight on the mountain overlooking highway 10.
It was a bit breezy overnight but not too bad. The descent to the desert floor was in bright sun and quite warm when the wind wasn't present.
Passed trail mile 200 today!
Made it to the drinking fountain at the bottom of the descent with a couple swallows of water left. Thanks to the Desert Water Agency for the drinking fountain.

Stopped at Coppertone's RV for a little bit, but he was out of ice cream, so we had donuts instead.

Coppertone is a roving Trail Angel. He hiked the trail a few years ago and now is retired, so for the summer he is following the hiker herd and providing trail magic, usually in the form of root beer floats.

Rested a bit before heading down to the 10 and then on to trail Angel Ziggy and the Bear's house.

Ziggy and the Bear at the Whitewater trail house were an institution, one that is no more.
In 2016 there was a fire up the trail from here, and people were scrambling for information on what to do since the trail was closed between Whitewater and Onyx Summit. I helped Mighty Mouse map out a road walk.
Being the non-purist, I decided to go home for a couple days off the trail while Mighty Mouse did her detour walk. 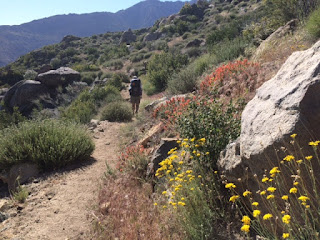 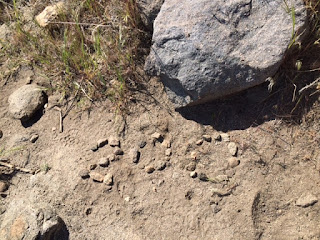 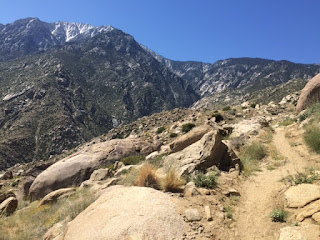 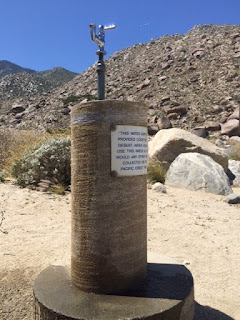 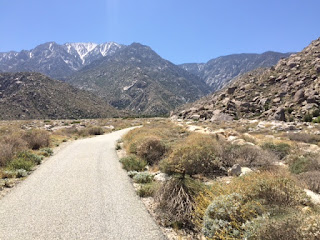 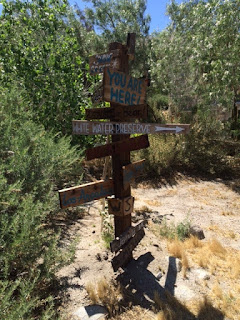 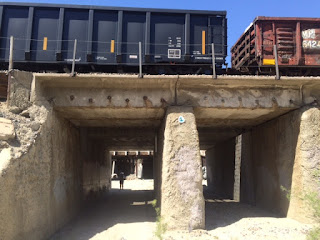 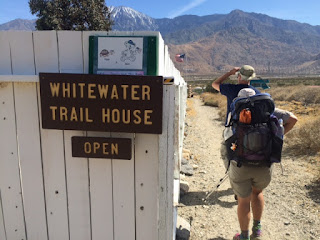 Further downhill into the desert today.

So, that's about eight and a half miles away from last night's camp site. And something like 3500 feet in elevation loss. Ye, lots more downhill, and it seemed like this trail hadn't seen a trail crew in a while, as it was rocky and there were quite a few bushes growing into the trail, trying to reclaim it.

We started off the day with two liters of water for those eight miles. Less than I would have liked, but I wouldn't have liked carrying more for all of yesterday and part of the day before. It's all about trade offs here on the trail.

On the way down the trail we did encounter a trail crew working hard, with horses even! Thanks to those folks, and to all the trail crews that get out there every year and keep the trail hikeable.

We also managed to walk through a bunch of bees that didn't seem to happy to have people walking by their hive.

Eventually we did make it to the water fountain. Wonderful cold water from, yes, a water fountain in the desert. The local water agency, the DWA (Desert Water Agency) has a water fountain tapped into their pipe that brings water down from their water tank that is the collection point for water from the creeks on this side of Mount San Jacinto.

There is a little bit of an argument about land use here, because although the DWA does a cool thing with the water fountain, it also has this side of the mountain closed off to other visitors, primarily climbers who would like to access the north side of San Jacinto, since that side of the mountain rises from 800 feet to 10,834 feet in seven horizontal miles. What that boils down to is that this is the steepest, fastest rise in elevation in the Lower 48 states. Yep, steeper than all of the Sierras, and the Rockies. And according to the DWA, climbers can't legally access the base of the climb.

But, the DWA insists that they control access to the land, and will not allow climbers through. They have guards on site and cameras and will call the police. And they have put up no trespassing signs on sections of land that they don't own, plus built structures on land that they don't own. The kicker is that the DWA gets 97% of its water from aquifers, and only 3% from surface water like they do in this valley. Incidentally, their own water tank and many of their pipes are actually on federal land, by permit, so quite often they are chasing people off public land.

I guess at least they aren't bottling the water like Nestle, but I'm guessing that they probably don't pay much for their water leases. Complicated issues.

At any rate, after drinking our fill and filling up a couple bottles for the remainder of today's hike, we tromped on down the paved road for a mile or two until we encountered Coppertone.

Who or what is Coppertone? Well, he's a retired guy who hiked the trail a few years ago and for the past couple years has travelled along the PCT route, parking his box-truck RV at PCT road crossings and providing trail magic to hikers. Sadly, when we got there he had just run out of ice cream for root beer floats. But he did have apples and donuts, so we stopped for a while and chatted with him and a couple other hikers who were hanging out. Unfortunately it was quite windy, so not quite as relaxing as it could have been.

We eventually headed out and trudged through soft sand against some very strong winds. The trail crosses under I-10 and then up a dry creek bed next to the small community of Whitewater. In Whitewater there is (or was, the owner of the house sold it and there is no more hiker stop here) the Whitewater Trail House, run by trail angels Ziggy and the Bear, an older couple who, together with several volunteers, run their house as a stop for hikers. Lots of hikers. Essentially all of the hikers on hte PCT at least make a brief stop here. There are trail angels who will give hikers rides to resupply from here, it's quite a drive to anything from Whitewater.

This year (2016) the big topic at hand was the fact that there had just been a fire ahead of us, and the trail between Whitewater and Onyx Summit up ahead was officially closed.

There was lots of conflicting information, but the gist of it was that the trail was officially closed, and rangers might or might not be turning people back or ticketing hikers or who knows. The ranger stations that we called had conflicting information, or none at all. The official guidance from the PCTA said that the route was now to get a ride to Big Bear and continue hiking from there.

Mighty Mouse and I decided that we wouldn't tempt fate by hiking up to the burn area, only to get sent back down. I was fine skipping this section. But Mighty Mouse really wanted to have continuous footsteps from Mexico to Canada, on trail or not.

So, using Google maps and some local knowledge, I helped Mighty Mouse come up with a walking route that would get her to Big Bear. She had already walked this part of the trail two years before, so wasn't worried about missing the actual PCT, she just wanted to keep going on a walking adventure.

I, on the other hand, arranged for a couple days off at home. More laundry to do and showers to take.

For those interested (or you could read Mighty Mouse's blogs for the next few days), the route we worked out was for Mighty Mouse to walk for 20 miles on the access road next to the I-10 going east, past Morongo Casino and Cabazon until she got to Beaumont. Then she would turn north and do more road walking up to highway 38, one of the roads that goes up to Big Bear. There was some unavoidable road walking on 38, on which people drive stupidly fast, then as soon as possible I found an older road to use, eventually ending up navigating a maze of dirt roads up the south side of the ski hill mountains by Big Bear. And then, well, down the ski runs, or their access roads.

My plan was to go home and enjoy a few days off, then get a ride back up to the trail at Onyx Summit, which was the closest road access on the north side of the fire closure.

So, today ended with me getting picked up by my girlfriend, and Tim and Mighty Mouse headed off to a hotel in Banning.