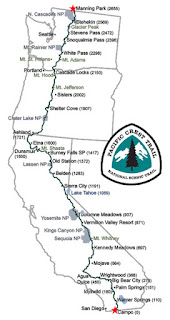 One day to departure for my hike of the Pacific Crest Trail (PCT).

For years I've wanted to do a long hike. Years ago while living out east, it was the Appalachian Trail that held my interest. Since moving to California it has been the PCT.

But to hike the whole trail takes five months. To get five months off work is pretty much impossible. I did get six months off a few years ago, but it would be pretty difficult to go backpacking while being treated for cancer as I was back then.

So, my former employer's massive restructuring provides me with the opportunity of time.

For those who don't know, the Pacific Crest Trail is a trail from the Mexican border in Southern California through the length of California, then across Oregon and Washington to end at the Canadian border.