Camping at Lake Morena campground. Warm shower and a burger at the town store. Beautiful sunset behind a mountain.
----
Met a few other hikers in Lake Morena. This is the first organized campground along the PCT, and it mostly serves car campers, but with a designated area for hikers.
Two guys camped in the tent area with me had already been here for a couple days. I can't remember their names, but one of them was from Australia and was already sidelined with bad blisters. This is only 20 miles into the trail. I don't recall seeing him again, but hopefully his hike didn't come to an end here at Lake Morena.
My first night on the trail I spent on a rock next to a creek about a mile and a half off the PCT.
The good part was this as my morning view.

A little use of the stove for breakfast, with the tracker in the background hopefully sending and receiving messages.

Walking up the side of a steep valley in the sun I found this little cave. Had to stop for a while to enjoy the cool shade.

Most of the day was spent hiking without shade. It's something that is just a part of the PCT. People think it's a hike in the woods, but the reality is that there just aren't that many canopy trees in Southern California. We have lots of chaparral though.

Nice sunset for the second day of my hike.

Photos from today: https://www.b-photo.com/Travel/PCT-2016-Day-by-Day/April/April-3/
Amusingly, I saw these three crazy people inflating a big queen size air mattress and then wrestling it into their large car camping tent. Little did I know then... 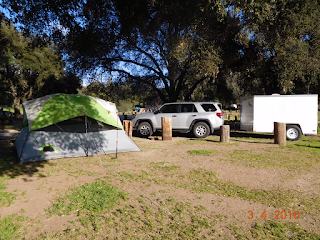