Today started out at our camp on the side of San Jacinto at about 8600 feet on elevation.
Our camp for tonight is at about 4900 feet, so we had quite a bit of descending.
Part of the hike included a section called Fuller Ridge which is a steep ridge that still holds a fair amount of snow on its north side. The weather on the ridge is quite variable. We were fortunate once again to have cool but not cold weather.
Crossing the snow patches wasn't too tricky, although a slip at the wrong point would have been bad. The blown down trees were entertaining, trail crews haven't been up on that section of the trail this season.

Tonight we are camped with a view of Cabazon and the wind farms along I-10. The wind is a bit gusty but my tent is at least partly sheltered by some manzanita bushes. 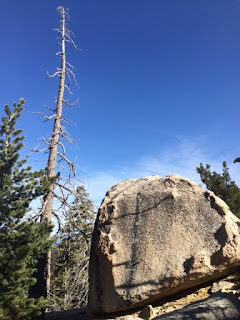 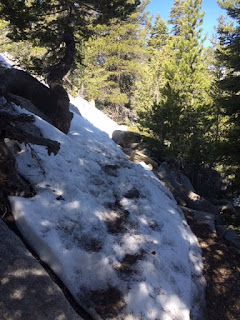 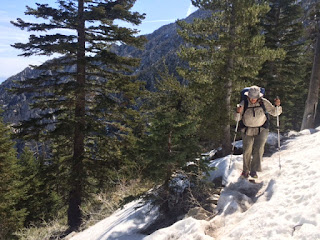 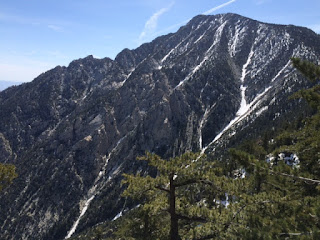 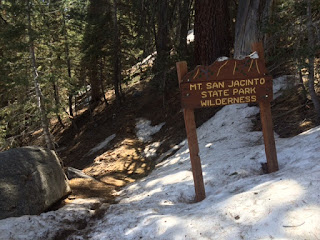 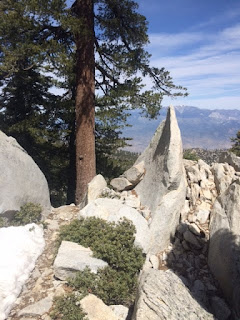 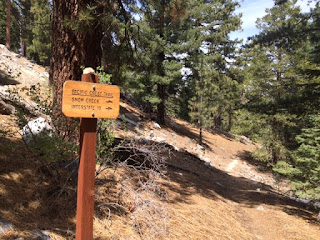 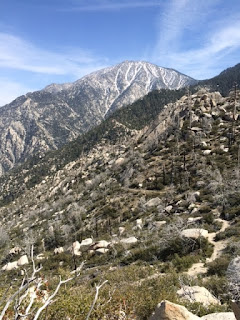 -----------
2021 Update:
Last night we were camped at around 8600' elevation, and tonight our planned stop is at around 4900 feet, so we have a bit of descending to do.
Since the PCT generally follows mountain ranges, thus the "Crest" in the title, it tends to go up and down a lot. Interesting aside here, the Appalachian trail, which doesn't get as high in elevation as the PCT, and is around 500 miles shorter, actually has much more elevation gain and loss, and generally takes a month or so more time to complete.
Well, today was a mostly downhill day. Sounds great, isn't great. Every step down puts extra stress on your knees and ankles and hips, especially with a pack on you back, doubly so when you have a whole lot of water in the pack.
This section of trail, descending from Mount San Jacinto, passes on the north side of Fuller Ridge, and is known for holding snow and ice late in the season and is considered one of the more hazardous parts of the southern portion of the trail. Fortunately there wasn't too much snow to cross, some years it can be as snowy here as the Sierras.
This section of the trail is very nice, with panoramic vistas of the desert valley and of the San Bernardino Mountains to the north.
The higher elevations are also covered in large pine trees, which transition to chaparral as the trail descends.
We reached our planned camp site around 5pm, plenty of time to set up tents and cook.
One thing about camp sites on the PCT, they're typically just flat spots where you can find them. There aren't a whole lot of organized campgrounds, just places where people before you have put their tents and over time cleared out spots, or flattened spots. The maps we used, produced by volunteers, noted camp sites, but they weren't guaranteed or anything like that, and sometimes a site might have room for one tent, sometimes room for dozens. So, if it got late and you were planning on some specific spot, and there was no room, well... hike on or get creative.
One reason for the tent site issues is that a whole lot of this trail is located on the sides of hills or mountains. So, for tents, that makes setting up a challenge as you need a flat spot.
Hammocks would seem a great choice then, but in large sections of the trail, there may not be trees available to hang from. We did meet a couple hammock users, and they were generally happy with their choice of shelter, but they did have to get creative in some areas.
So, at this camp we set up on a couple flat spots, there really weren't a whole lot of flat spots. Some other hikers rolled in a few hours later and managed to find flattish spots among the bushes, since they didn't want to press on the four more miles to the next usable camp sites.
Photos from today: https://www.b-photo.com/Travel/PCT-2016-Day-by-Day/April/April-21/
Mighty Mouse's blog for today: http://www.timandgerri.com/blog---2016/day-20-21-april-mile-18661-19718