Woke up to snow.
The snow actually started falling at 11:30pm, and continued off and on for much of the night.
My tent isn't really designed for snow, and I had to occasionally kick my feet up to knock the snow off the end of the tent.
I waited in the tent in the morning until the sun did a little melting of the snow, so no pictures of the tent all covered.
Today's hike was largely through a burn area to the north of Big Bear Lake.
Lots of burnt and called or cut trees along the trail. 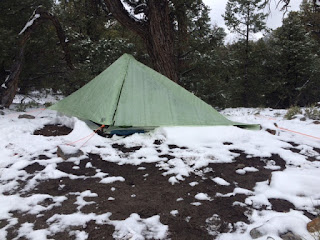 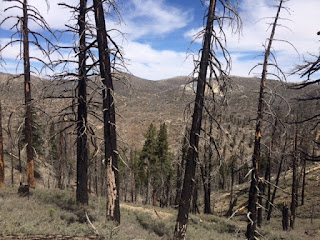 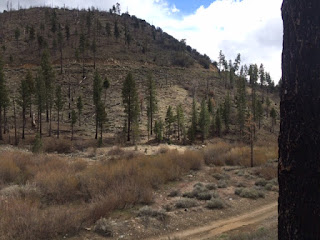 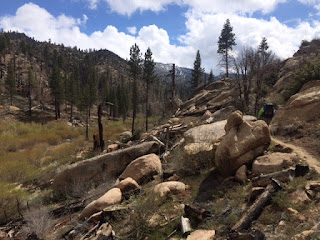 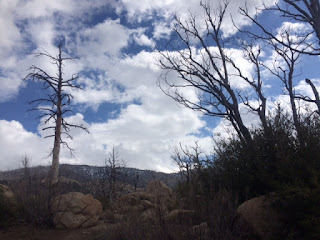 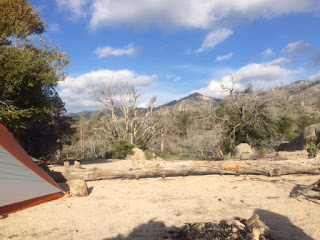 Camped at the junction of the PCT and Cougar Crest Trail, where I was to meet Mighty Mouse this morning.

It started snowing last night, and kept it up for quite a while, and I kept waking up and having to kick the snow off the bottom of the tent, since the weight of the snow kept making the tent sag down onto my feet. I even had to get out once and sweep the snow off the tent. This tent definitely isn't designed to deal with snow.

At any rate, morning eventually arrived, and after I ate breakfast, Mighty Mouse showed up and we headed out on the PCT.

Most of the hike today was through burned areas. I imagine that at some point, the trail was nicely shaded, but now, not so much.

We found a nice campsite for the night. It even came with a nice log for sitting on or leaning back against.