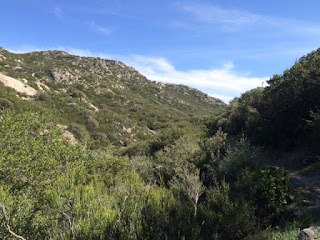 Hot day for a clump out of Lake Morena.
--------
Or a climb.
Leaving Lake Morena I felt like the trail was a sandy trough that just sapped my energy. But maybe that is just my memory playing up the difficulty. Or maybe I just wasn't in good trail shape.
Good to find a shaded resting spot under a bridge.
This is a bridge over Cottonwood Creek. Yes, the same creek that I got water from and camped next to. In between that point and this, there is a dam and the reservoir that is Lake Morena. On this side of the lake, Cottonwood Creek is rather dry.

And enjoy some flowers along the way.