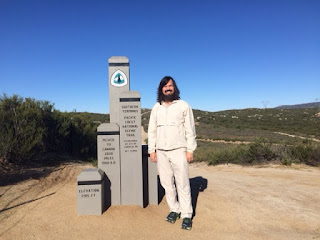 The journey begins.
My mom drove me down in her Smart car and took a few pictures at the Southern Terminus memorial.

Mom posing with the border wall/road in the background.

Mom and the Smart car departing.

Just have to get a picture of the first mile marker, probably the most photographed mile marker since I imagine that pretty much everyone gets this far. It's also one of the few mile markers of significance that isn't hiker created.

Crossed these tracks along the way. My path won't be as nice and flat.